EVERYONE KNOWS WHAT doctors do: they diagnose and treat illness.

First, a patient comes to the doctor and complains of symptoms.

Then the doctor examines him and perhaps performs some laboratory or other tests.

Finally, having arrived at a diagnosis, the doctor applies the correct treatment, be it pharmacological or surgical.

From the purely abstract point of view, it is all rather simple and straightforward.

In practice, however, complications sometimes arise.

For example, last week there was a patient in my ward who told me that he had been off sick from work for the past year.

‘With what sickness?’ I asked.

Normally in these circumstances this question produces puzzlement, as if it were a complete irrelevance. But this particular patient was well prepared.

I confess I was surprised.

He looked a fit young man to me, and he moved around with perfect ease, not like a man crippled by back pain.

Moreover, he had a number of cuts and bruises on him, the result of having been beaten up by a gang of children who had tried to mug him in the street and whom he had unwisely chased.

People with back pain are quite often mugged, of course, but they rarely run after their muggers.

Perhaps this man was emboldened by the fact that his hobby was martial arts: again, an odd choice of pastime for someone with incapacitating backache.

I telephoned his general practitioner with my suspicions, thinking that perhaps he had been deceived by his patient into signing him off sick.

I told the doctor my grounds for suspecting that his patient’s backache was not as bad as he claimed. It turned out, however, that I was telling the doctor nothing he did not already know.

‘Yes,’ he said, ‘he has never struck me as having been in much pain.’

‘But he has been off sick for the past year,’ I said, my voice tinged with outrage.

‘Yes,’ said the doctor, ‘but the last patient whom I made fit to work when he didn’t want to return to work picked up my computer and threw it at me. We ended up having a fight on the floor.’

I understood at once.

It isn’t only sick notes that are procured by threat, of course: round here all mind-altering substances – tranquillisers and antidepressants – are prescribed not for the patient’s sake but to forestall an attack on the doctor, who gives that patient whatever he wants to remove him from his presence as quickly as possible, before the patient spits at or punches him.

Things are a little better in the prison, I’m glad to say.

There the doctor is free to do what he thinks is best for the patient, thanks to the proximity of several very large men at his beck and call.

Last week, a patient arrived in the prison, a fit (though presumably not very skilful) young burglar.

‘Are you on any treatment?’ I asked him.

An opiate analgesic, an addictive tranquilliser (diazepam) and an antidepressant (amitriptyline).

‘Ah, a burglar with a backache.’ I said.

He smiled at me, and I smiled back.

Then we had a good chuckle together.

‘Nice one, Doctor,’ he said as he left the room, in excellent spirits.

‘Sick notes’ – notes provided by a doctor to a patient excusing the patient from work and enabling him to claim statutory sick pay or other benefits.

‘Nice one’ – an expression used to indicate happiness or agreement.

Taken from Second Opinion: A Doctor’s Dispatches from the Inner City

Available in trad book form here with free postage and packing worldwide, or here at amazon.co.uk

Also available as an eBook at amazon.co.uk (and other relevant Amazon sites) 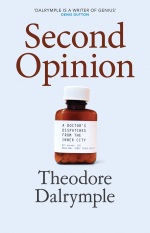